The Department of Education began accepting applications online on December 17 for REPAYE, a new income-driven repayment plan of particular importance to those whose student loans were disbursed prior to October 1, 2011 (borrowers can alternatively submit a paper application to their servicer). The Department of Education offers a number of different reduced student loan repayment plans that take the student’s income into consideration. While none of these plans are available for those in default, they become available after getting out of default by consolidating or rehabilitating the loan (as explained at NCLC’s Student Loan Law chapter 7 (5th ed. 2015).

For most recent student loan borrowers the most favorable plans to repay federal Direct Loans have been the Income Based Repayment (IBR) and Pay as You Earn (PAYE). REPAYE joins these plans as the most favorable plan for most borrowers with older Direct loans, and as a good option to consider for those with more recent loans also eligible for PAYE. Under IBR, PAYE and REPAYE, a key term is “discretionary income” which is how much income the student has after deducting an amount equaling 150% of the poverty line for the student’s home state and family size.

IBR (for loans made after July 1, 2014) and PAYE allow for payments as low as 10% of the consumer’s discretionary income. After 20 years, any remaining balance is forgiven in most circumstances. For more detail on these plans, see NCLC’s Student Loan Law § 3.3.3 (5th ed. 2015).

Until now those whose federal student loans were disbursed prior to October, 2011 had to make payments that could be 50% higher than those with recent loans. The more favorable IBR terms only applies to loans made after July 1, 2014, and PAYE applies to loans where there was at least one disbursement after October 1, 2011 and there was no outstanding loan balance on October 1, 2007. In addition, until now, repayment plans applicable to older loans did not forgive the debt until 25 years of payments instead of 20 years.

REPAYE allows any Direct Loan, no matter how old, to be repaid at 10% of discretionary income. In addition, for eligible undergraduate loans, forgiveness occurs at 20 years (for those with any eligible loans taken out for graduate or professional school, forgiveness does not occur until 25 years of payments). Those with Federal Family Education Loans (“FFEL”) that are not eligible for REPAYE may be able to consolidate their old loans into a new Direct Loan and then apply for REPAYE.

Much more detail on IBR, PAYE and REPAYE is found in NCLC’s Student Loan Law chapter 3 (5th ed. 2015). The print edition released earlier in 2015 described IBR and PAYE, but does not include REPAYE. The online version has just been updated to include a discussion of REPAYE. 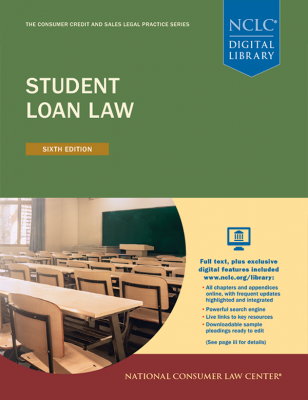