On June 30, the Supreme Court issued a consequential decision in West Virginia v. Environmental Protection Agency,2022 WL 2347278 (U.S. June 30, 2022) (W. Va. v. EPA).  The decision, based on the “major question doctrine,” struck down the EPA’s authority to require power plants to move away from the use of coal.

The major question doctrine applies where a novel federal agency rule will have an expansive effect and significantly impact the nation’s economy.  In such a case, the Court goes beyond statutory language authorizing such agency rulemaking and looks at other factors to determine whether Congress intended to delegate such authority to the agency.

Whatever the merits of the major question doctrine, it is hard to see how the doctrine impacts virtually any consumer law litigation alleging violations of an agency regulation. This will not prevent litigious defendants from raising the doctrine, and it may even result in some courts seriously considering such challenges—particularly where the judge is already skeptical of federal agency rulemaking. See, e.g., Am. Health Care Ass’n v. Burwell, 217 F. Supp. 3d 921 (N.D. Miss. 2016) (while finding arbitration requirements placed on nursing home residents repugnant, issuing nationwide injunction against HHS restriction on mandatory arbitration involving nursing homes receiving Medicaid funds, because of the “incremental ‘creep’ of federal agency authority beyond that envisioned by the U.S. Constitution”).

West Virginia v. Environmental Protection Agency (W. Va. v EPA) considers an EPA rule that would require a restructuring of the nation’s overall mix of electricity generation, requiring a transition from 38% coal to 27% coal by 2030.  The EPA found congressional authorization for the rule in a statutory provision giving the EPA authority to specify the “best system of emissions reduction.” The question for the Court was whether Congress really intended to give the EPA such authority as seemingly provided by the statute.

The majority decision held that normal principles of statutory interpretation of congressional intent do not apply.  Instead, in “extraordinary cases”—that is cases where “the history and breadth of the authority asserted and the political and economic significance of that assertion” are out of the ordinary—the Court will follow a different analysis of congressional intent.  W. Va. v EPA, at *3.

The Court greets assertions of extravagant statutory power over the national economy with skepticism. In that case the congressional authorization must be clear.  Importantly, the Court accepts that Congress can authorize such expansive rules of major impact on the economy if the authorization is explicit.

On the other hand, the Court is skeptical of a congressional intent to authorize a rule where the rule has a significant impact on the nation and relies for its statutory authority on “oblique or elliptical language,” “vague language in an ancillary provision,” “a gap filler, rarely used in the preceding decades,” or “a little used backwater.”  W. Va. v EPA, at *24. Such language does not empower an agency to make a radical or fundamental change to a statutory scheme, and it is not sufficient to show congressional delegation of that authority.

It is instructive to consider some of the examples the Court provides of the proper application of the doctrine.  The Court cited the Center for Disease Control’s nationwide moratorium on evictions and the Occupational Safety and Health Administration’s requirement that 84 million workers must be vaccinated or tested weekly at their own expense. In both cases, the Court concluded that the agency’s enabling legislation did not explicitly cover such regulation, and the Court refused to allow such major rulemaking outside of the agency’s normal area of expertise where the impact on the nation is so significant. W. Va. v EPA, at *12.

In W. Va. v. EPA, the Court found that the challenged rule would implement a fundamental revision of the EPA statute, from limiting specific levels of sources of pollution to a broader regulation of whether coal can be used at all and how Americans will get their energy.  Before the EPA can take on that task, there must be a clear delegation of congressional authority to do so.

Application of the major question doctrine to an EPA rule affecting the nationwide mix of electricity generation is far removed from its application to those regulations that form the basis of consumer litigation.  Nevertheless, consumer practitioners should not be surprised when defendants cite to the doctrine in challenging consumer complaints based on federal regulations.  This article provides five tips to counter such challenges.

Tip # 1:  Allege the Defendant’s Conduct Violates the Statute, and Not Just a Regulation

For example, consider a case based on a violation of debt collection regulations issued by the CFPB. Regulation F at 12 C.F.R. § 1006.30(a) prohibits debt collectors from furnishing information to consumer reporting agencies about a consumer before first notifying the consumer about the debt.  See generally NCLC’s Fair Debt Collection § 8.12.  The practitioner can also allege that the practice violates the FDCPA itself and not just Regulation F.  The practice can be seen as an unfair or unconscionable means to collect a debt in violation of FDCPA § 1692f and as conduct the natural consequence of which is to harass, oppress, or abuse in violation of FDCPA § 1692d.  15 U.S.C. §§ 1692f, 1692d. Then the major question doctrine cannot be a defense to the statutory claim.

Tip #2:  Show a Clear and Prominent Congressional Delegation of Authority to Issue the Rule

The second step is to review the language in the applicable statute providing the agency with rulemaking authority. For example, the FDCPA provides:

Except as provided in section 1029(a) of the Consumer Financial Protection Act of 2010 [12 U.S.C. 5519(a)], the Bureau may prescribe rules with respect to the collection of debts by debt collectors, as defined in this subchapter.

The Truth in Lending Act provides:

The Bureau shall prescribe regulations to carry out the purposes of this subchapter. Except with respect to the provisions of section 1639 of this title that apply to a mortgage referred to in section 1602(aa)  of this title, such regulations may contain such additional requirements, classifications, differentiations, or other provisions, and may provide for such adjustments and exceptions for all or any class of transactions, as in the judgment of the Bureau are necessary or proper to effectuate the purposes of this subchapter, to prevent circumvention or evasion thereof, or to facilitate compliance therewith.

The Bureau shall prescribe regulations to carry out the purposes of this subchapter. These regulations may contain but are not limited to such classifications, differentiation, or other provision, and may provide for such adjustments and exceptions for any class of transactions, as in the judgment of the Bureau are necessary or proper to effectuate the purposes of this subchapter, to prevent circumvention or evasion thereof, or to facilitate or substantiate compliance therewith.

Unlike what the Court described in W. Va. v. EPA, these statutory authorizations of rulemaking are not “oblique or elliptical language,” “vague language in an ancillary provision,” “a gap filler, rarely used in the preceding decades,” or “a little used backwater.”  Instead, these authorizations are prominent, straightforward, and clear.

The third step is to show that the agency regulation is clearly within the statutory rulemaking authority granted to the agency.  Again, the supplemental information in the Federal Register notice promulgating the rule often will indicate how the rule is within this congressional delegation of authority.  By showing that the rule has clear congressional authority, the major question doctrine becomes inapplicable.

Tip #3: Show the Rule Is Within the Agency’s Expected Authority

In its analysis using the major question doctrine, the Supreme Court made much of the fact that the EPA regulation dealt with a subject matter that the Court’s majority found to be outside the agency’s normal area of expertise—the CDC regulating evictions, OSHA regulating vaccinations, the EPA determining the national policy as to the nation’s use of coal instead of just regulating particulate emissions.  On the other hand, the major question doctrine should not apply to rules that are within the agency’s expected and normal area of regulation.

This statutory-announced purpose for the CFPB is consistent with the purpose of the CFPB’s Regulation F on the FDCPA, found at 12 C.F.R. § 1006.1(b):

Thus, the regulation’s stated purpose is clearly within the agency’s normal area of operation as set out by the enabling statute.

Tip #4: Show the Limited Nature of the Specific Regulation

The major question doctrine applies to rules that have an “extravagant” statutory power over the national economy.  For example, the Court in W. Va. v. EPA states that the EPA rule is notable for its breadth of the authority asserted and its national political and economic significance.

Does the challenged consumer regulation involve an extravagant statutory power over the national economy?

What is at issue is not the agency’s overall political and economic impact, but only the impact of the specific rule that is the basis for the consumer’s allegation. The CFPB or HUD or Department of Education may be seen as asserting broad authority of national significance (that is clearly delegated to it by Congress).  Nevertheless, what is at issue is not the significance of the agency’s overall actions, but the national significance of a specific CFPB, HUD, or other agency rule provision that is being challenged in the litigation.  Does a rule adding a requirement that a debt collector provide certain additional initial disclosures beyond those already explicitly required by statute assert extravagant authority over the national economy?

Another ground for the Court applying the major question doctrine in W. Va. v. EPA was that the EPA had previously only regulated particulate emissions and had never attempted to alter the mix of sources of energy used in creating electricity generation.  Most consumer regulation is not such a novel departure from normal regulation of consumer transactions. For example, disclosure requirements, rights to cancel, and prohibitions on unfair and deceptive practices are found in numerous CFPB and FTC regulations. A new rule requiring disclosure, providing a right to cancel, or prohibiting unfair or deceptive practices is nothing new for the CFPB or the FTC.

Since 1969, the nonprofit National Consumer Law Center® (NCLC®) has used its expertise in consumer law and energy policy to work for consumer justice and economic security for low-income and other disadvantaged people, including older adults, in the U.S. 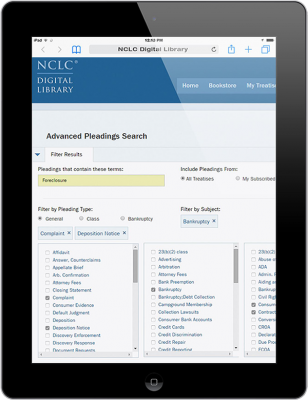 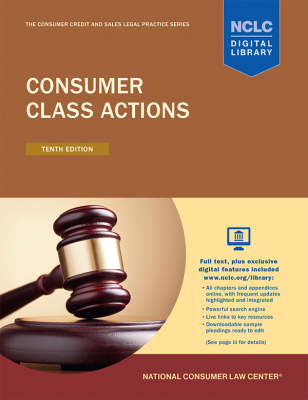