On May 26, the California Supreme Court, in Pulliam v. HNL Auto. Inc., 2022 WL 1672918 (Cal. May 26, 2022), issued the most important interpretation of the FTC Holder Rule (16 C.F.R. pt. 433) since the rule’s 1975 promulgation. Resolving (at least for California) an ambiguity that had divided courts around the country for decades, Pulliam holds that the FTC Holder Rule does not cap a consumer’s attorney fee award against a creditor when raising seller-related claims against that creditor.

This article explains the nationwide significance of the Pulliam holding in advancing both consumer remedies and creditor policing of a broad array of sales transactions. The article further details the court’s reasoning in Pulliam, showing how it would apply in courts throughout the country. Finally, the article lists and explains twelve additional FTC Holder Rule features critical to maximizing the rule's use in consumer transactions.

Dramatic Impact of Pulliam on Consumer Remedies and Protection

It provides that “recovery hereunder by the debtor” is capped at the amount of the consumer’s payments in the transaction. The consumer’s maximum “recovery hereunder by the debtor” is cancellation of the remaining amount due plus an affirmative recovery of any amounts the consumer has already paid. For a detailed analysis of the FTC Holder Rule, see NCLC’s Federal Deception Law Chapter 4.

Courts in California and around the country have split as to whether the cap on “recovery hereunder by the debtor” applies to a consumer’s attorney fee award or whether the consumer can recover all attorney fees that the court has awarded, despite the Holder Rule cap. See NCLC’s Federal Deception Law § 4.3.5.1.

Pulliam is now the leading case explaining why attorney fees awarded against a creditor are not subject to the cap and that a prevailing consumer can recover all fees that the consumer is entitled to under state law. This is now the law in California state courts and the logic of the decision is persuasive for courts elsewhere. See generally NCLC’s Federal Deception Law § 4.3.5.2.

A surprising aspect of the Pulliam decision is that it is not based on Cal. Civ. Code § 1459.5, which provides that recovery under the FTC Holder Rule allows a consumer to recover attorney fees “to the fullest extent permissible if the plaintiff had prevailed on that cause of action against the seller.” Instead, it is based on the court’s interpretation of the Holder Rule itself, so should be persuasive for courts outside California.

The decision is of the utmost importance for consumer relief. State legislatures pass fee-shifting laws for consumer claims because they recognize that otherwise the substantive protection would be hollow. If attorney fees against the creditor—often the only solvent party—are capped, consumers will rarely find legal representation or be able to effectively press their rights. The availability of a fee award against the creditor also encourages settlement and discourages businesses from wearing down consumer claims using their superior resources.

The Holding in Pulliam

Pulliam holds that the FTC Holder Rule does not limit an award of attorney fees where a consumer seeks fees from a holder, even when awarded against a creditor under a state prevailing party provision found in the same statute that forms the basis of the consumer’s claim against the seller. In Pulliam, the consumer’s seller-related claim against the creditor was based on the dealer’s breach of implied warranties, remedied under California’s Song-Beverly Consumer Warranty Act, Cal. Civ. Code § 1794. Section 1794(d) provides:

If the buyer prevails in an action under this section, the buyer shall be allowed by the court to recover as part of the judgment a sum equal to the aggregate amount of costs and expenses, including attorney's fees....

Even though the fee award was based on the same statute as the consumer’s substantive claim, Pulliam rules that attorney fees awarded against the creditor are not included in the “recovery hereunder by the debtor” and are not capped. If followed in other states, this would mean that under most fee-shifting statutes, attorney fees awarded against the holder would not be subject to a cap.

The Logic of the Pulliam Decision

Pulliam reaches its holding by first finding that the FTC Holder Rule language “recovery hereunder by the debtor” is ambiguous as to whether or not it includes the consumer’s attorney fee recovery. The court finds it reasonable to interpret the language as applying only to a damage recovery and not to fees, since the fees will be received by the consumer’s attorney and the rule language specifies “recovery hereunder by the debtor.” Pulliam also refutes creditor arguments that the language must be viewed as clearly including fees.

Since the rule language is ambiguous as to whether “recovery hereunder by the debtor” includes attorney fees, the court relied primarily on the rule’s purpose and history to reach its conclusion, and not later interpretations issued by the agency itself (i.e., the FTC). The court’s reliance on rule history and agency intent as opposed to later agency interpretations is mandated by the U.S. Supreme Court in Kisor v. Wilkie, 139 S. Ct. 2400 (2019).

In reviewing the rule’s history, the Pulliam court noted that prior to 2019, the FTC had never mentioned attorney fee recoveries in the rule’s statement of basis and purpose or subsequent interpretations. Instead, FTC pronouncements at the time of the rule’s promulgation focused on damage recoveries. The FTC said that “consequential damages and the like” are considered “recoveries.” By focusing on damages only, the history implies that attorney fees are not “recoveries hereunder by the debtor.” “Had the FTC intended its Rule to sweep so broadly, we would expect to see some discussion of other types of awards, not just damages.” Pulliam, at *7.

The decision also finds the FTC’s intent in promulgating the Holder Rule was that “buyers would be able to assert defenses against creditor claims based on the Holder Rule as well as pursue affirmative litigation against creditors for seller misconduct, which would be financially infeasible for many buyers if attorney’s fees were not recoverable.” Pulliam, at *7.

The court quoted extensively from the rule’s Statement of Basis and Purpose, 40 Fed. Reg. 53,506 (May 14, 1975), to show that the FTC in enacting the rule was concerned with defrauded consumers’ ability to obtain representation to vindicate their rights. The rule’s core purpose is to make practical not only consumer defenses but also affirmative claims.

The court concluded that it would be nonsensical for the FTC to adopt a rule intended to make it practical for consumers to recover from businesses that had cheated them, while at the same time crafting the rule to defeat that very purpose. “Were attorney’s fees part of the Holder Rule’s limit on recovery, the effective result for many, if not most, consumers would be the same as their options were under the holder in due course rule that the FTC sought to supplant.” Pulliam, at *9.

Where state law provides that a consumer who prevails in a suit can recover attorney fees, then it is not a seller-related fee award but is an award against the creditor for its litigation of the consumer’s valid claim. This fee award is separate from and in addition to the creditor’s capped liability under the rule.

The Pulliam court was also persuaded by the FTC’s intent that the rule should not limit stronger state remedies:

The limitation on affirmative recovery does not eliminate any other rights the consumer may have as a matter of local, state, or federal statute. The words “recovery hereunder” which appear in the text of the Notice refer specifically to a recovery under the Notice. If a larger affirmative recovery is available against a creditor as a matter of state law, the consumer would retain this right.

The Pulliam court concluded its analysis of the rule’s history and intent with the following:

In sum, the FTC was cognizant of the challenges facing consumers bringing suit, including high legal costs, and it intended and expected affirmative suits by consumers to help correct the market failures it identified. In light of this history, it would be antithetical to the purpose of the Holder Rule to conclude that the FTC intended to “render ... uneconomic” one of the two ways it provided to address the concerns it sought to alleviate [affirmative claims against a creditor] by implicitly limiting a consumer’s ability to obtain attorney’s fees.

In Kisor, the Supreme Court held that a rule’s history and intent trump the agency’s later interpretations. Nevertheless, the Pulliam court also concluded that its holding is consistent with the FTC’s 2019 confirmation of the rule at 84 Fed. Reg. 18,711 (May 2, 2019). There, the FTC stated:

We conclude that if a federal or state law separately provides for recovery of attorneys’ fees independent of claims or defenses arising from the seller’s misconduct, nothing in the Rule limits such recovery. Conversely, if the holder’s liability for fees is based on claims against the seller that are preserved by the Holder Rule Notice, the payment that the consumer may recover from the holder—including any recovery based on attorneys’ fees—cannot exceed the amount the consumer paid under the contract.

The creditor in Pulliam argued that this language capped attorney fees where the fee-shifting provision was found in the consumer’s statutory claim against the seller—as was the case in Pulliam where the consumer’s seller-related claim against the creditor was based on Song-Beverly Consumer Warranty Act § 1794 and the fee award was based on § 1794(d). The creditor argued that fees could only avoid the cap if awarded under a separate statute or rule allowing the prevailing litigant to recover fees from the defendant.

Pulliam reads the FTC language differently—where a seller is liable for a consumer’s attorney fees and the consumer later attempts to recover that amount from the creditor, those fees are capped; however, where the court awards fees directly against the creditor based on the creditor’s participation in the litigation, those fees are not capped:

The Holder Rule’s cap on recovery applies to attorney’s fees where a plaintiff’s claim to attorney’s fees lies against a seller and, by virtue of the Holder Rule, is extended to lie against third party creditors. It does not apply where the claim for fees lies against the third-party creditor in the first instance. If state law authorizes fees against a holder, the FTC agrees that the Holder Rule places no limitation on their recovery. In such circumstances, it is of no moment that the buyer’s substantive claims against the holder may be related to the seller’s misconduct.

Pulliam Should Be Persuasive for Courts in Other States

Pulliam is binding on California courts, but only persuasive as to courts in other states. As described above, the decision explains in detail why fee awards should generally not be limited by the FTC Holder Rule cap, and the same analysis should apply in other states. Pulliam finds no cap where the consumer’s seller-related claims raised against the creditor is based on the same statute that also forms the basis for the consumer’s attorney fee award against the creditor.

In addition to Pulliam’s holding that the Holder Rule does not cap attorney fees against a creditor, here are twelve other important FTC Holder Rule features: 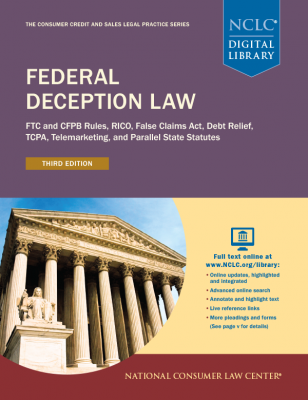