The Supreme Court on June 1 has just held in Bank of America, N. A. v. Caulkett that a wholly underwater mortgage cannot be stripped off and voided using Bankruptcy Code § 506(d) in a chapter 7 bankruptcy case. The decision should have little impact on consumer bankruptcy cases, since most courts (except those in the Eleventh Circuit) had previously held that mortgage strip off in chapter 7 was not possible, based on the Supreme Court’s earlier decision involving a partially secured mortgage in Dewsnup v. Timm, 502 U.S. 410 (1992). The earlier Dewsnup decision and its impact on the modification of home secured mortgages in chapter 7 cases is discussed in NCLC’s Consumer Bankruptcy Law & Practice § 11.2.1.2 (10th ed. 2012 with online updated revision).

The Caulkett holding is limited to chapter 7 cases, and the reasoning of the Court should not prevent consumer debtors from continuing to strip off wholly unsecured mortgages in chapter 13 cases. The vast majority of courts, and all Circuit Courts that have ruled on the matter, have concluded that a wholly underwater mortgage may be provided for in a chapter 13 plan as an unsecured claim based on the application of § 506(a) and § 1322(b)(2). See NCLC Consumer Bankruptcy Law & Practice § 11.6.1.2.2.2. These courts have relied on the language in the Supreme Court decision in Nobelman v. American Sav. Bank, 508 U.S. 324 (1993), that in determining whether creditors are "holders of secured claims" that are entitled to protection from modification under § 1322(b)(2), a court must first look to § 506(a) for a valuation of the claim's secured and unsecured components. With no value supporting its claim based on the § 506(a) analysis, the holder of an underwater lien does not have a secured claim, and therefore the lien may be modified under § 1322(b)(2). The actual strip off and avoidance of the mortgage in chapter 13 cases is not based upon § 506(d), but rather through the application of § 1322(b)(2) alone or in combination with § 1327(c).

Nothing in Caulkett undermines the reasoning supporting chapter 13 strip offs. The Court was careful to limit its discussion to the application of § 506(d), which again is not used in chapter 13 strip offs. Specifically, the limited holding in Caulkett is that “a debtor in a Chapter 7 bankruptcy proceeding may not void a junior mortgage lien under § 506(d) when the debt owed on a senior mortgage lien exceeds the current value of the collateral.”

The Court also distinguished its decision in Nobelman, stating that: “Nobelman said nothing about the meaning of the term ‘secured claim’ in § 506(d). Instead, it addressed the interaction between the meaning of the term ‘secured claim’ in § 506(a) and an entirely separate provision, § 1322(b)(2).” This makes clear that the interplay between § 506(a) and § 1322(b)(2) in chapter 13 cases remains viable and will continue to support strip offs in chapter 13 cases. The Supreme Court was made aware in the briefing in Calulkett of the unanimous Circuit Court decisions permitting chapter 13 strip offs, and yet did not include dicta or any suggestion that these decisions were wrongly decided.

In rejecting the debtor’s argument that the Dewsnup holding should be limited to partially secured liens, the Court stated that this distinction could result in some “arbitrary results” as only one dollar difference in value might prevent a strip off. However, the Court in Caulkett also noted that there are many provisions in the Bankruptcy Code that provide for this kind of “line-drawing,” where a dollar difference can have a significant impact. The Court stated that it was appropriate for Congress to draw such lines in specific Code provisions, but not for the Court itself to do so in a provision such as § 506(d) that does not by its express terms refer to valuation or line-drawing. Again, chapter 13 strip offs rely upon § 506(a), where the line-drawing between a secured and unsecured claim based on the value of the collateral was clearly done by Congress in the specific words of the statute. Thus, Caulkett suggests that the potential dollar difference result in chapter 13 strip offs is appropriate, because the line-drawing was done by Congress. 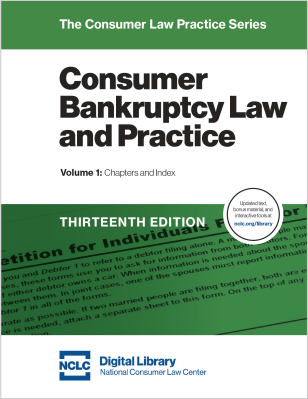