The Talent-Nelson Military Lending Act (MLA), 10 U.S.C. § 987, enacted in 2006, imposes a 36% interest rate cap, bans mandatory arbitration, and imposes other restrictions on “consumer credit” extended to service members and their dependents. The MLA thus applies to more than 5 million Americans.

The MLA though applies only to an individual who, at the time he or she becomes obligated on a consumer credit transaction, is an active duty member of the armed forces or a dependent of an active duty member. [Other federal protections (including a 6% interest rate cap) apply where a service member became obligated before going on active duty—see NCLC’s Collection Actions ch. 7. As described in NCLC’s Consumer Credit Regulation § 2.2.5, the MLA was sharply restricted by Department of Defense (DoD) regulations, 32 C.F.R. § 232, that limit MLA coverage of “consumer credit” to certain payday, auto title pawn, and refund anticipation loans.

New DoD rules announced on July 21, 2015, dramatically expand the MLA’s coverage to almost all forms of credit within the Truth in Lending Act’s scope, other than residential mortgages and purchase money loans, so that this wider range of creditors will be prohibited from charging more than 36% interest or requiring consumers to submit their disputes to arbitration. Notably, MLA coverage is expanded to include credit cards and other forms of open end credit, and creditor attempts to structure credit to evade the prior MLA definition of “consumer credit” will be thwarted.

The new rule also defines as finance charges that should be included in the calculation of the “Military Annual Percentage Rate” (MAPR) certain additional charges not included in the present rule. As a result, certain credit transactions that now are under the 36% cap but include ancillary charges will instead exceed the 36% limit. The rule also includes other changes as to how a creditor identifies a member of the military entitled to MLA protections and the disclosures creditors must provide. 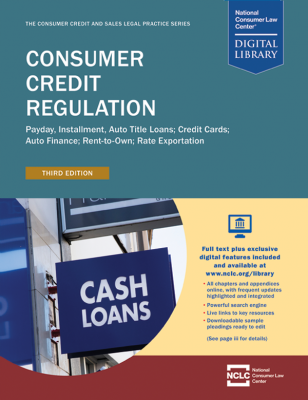